In December 2019, when the first reports of a strange new virus in China emerged, no one imagined the devastating effect the infectious parasite would have on the world. But by the end of July, about 15 million people in some 177 countries had tested positive for Severe Acute Respiratory Syndrome Coronavirus 2 (SARS-CoV-2) and over 600,000 had died as a result of the attendant disease (COVID-19). The U.S. appears to have been affected more than most other countries, where over five million have been infected and more than 164,000 deaths have been reported.

Along with its catastrophic consequences on health, the coronavirus has disrupted business as usual at home and caused similar havoc abroad; economies around the world have been crippled as authorities imposed social distancing and other safety measures to slow or stop the spread of the virus. On the domestic front, a recent Commerce Department report revealed that economic activity in the second quarter of 2020 fell by an annualized rate of 32.9 percent. Compared to this precipitous decline, the economic slowdown experienced during the Great Recession (Q4 2007-Q2 2009) is—at 4.3 percent—a mere blip on the chart.

Small businesses have suffered the most. A survey “of more than 5,800 small businesses between March 28 and April 4, 2020” conducted under the auspices of the National Academy of Sciences (NAS) found that “43% of businesses had temporarily closed, and nearly all of these closures were due to COVID-19.” Interruptions in the supply chain played some part in these shutdowns but concerns for the health of employees and customers were uppermost in the minds of most proprietors. Additionally, similarly alarmed by the high infection rates prevailing in March and April, customers mostly observed lockdown mandates and curtailed all but the most necessary spending and shopping expeditions. The hardest hit were those B2C and B2B businesses that provide non-essential services.

Depressed demand continues to threaten the survival of many small businesses, as it directly affects their cash flow. Approximately three-quarters of respondents to the NAS study had only enough cash on hand to last two months or less, not a very comforting statistic but one that paints a better picture than four years previously. Then, a JP Morgan survey found that “the median small business is essentially living month to month with… [only enough reserves] to withstand 27 days without cash inflows.” Nonetheless, despite these grim figures, small business owners, on the whole, remain optimistic. Most expect the battle against the pandemic to be soon won. The question is how soon is soon.

Employment
Anxious about the risk of spreading the virus and beset by reduced demand, many small businesses resorted to laying off staff. On average, active employees across the country fell by 39 percent. The hardest hit was the Mid-Atlantic region, which includes New York City, where employment was down by 47 percent, this after 54 percent of firms ceased operating. Businesses most affected were those in the arts and entertainment, food services, personal services, and hospitality industries. The massive layoffs are not surprising. About half of the U.S. private sector labor force is employed by these small businesses.

Business Deaths
Fatalities from the coronavirus have struck small businesses as well as individuals. From March 1 – July 10, over 72,000 businesses have closed shop forever, according to a report from Yelp. Many of these permanent closures may have been due to the inability to access support under the Paycheck Protection Program (PPP). However, the reinstitution of lockdown measures as infection rates rose again also played a part. This “second blow’ has proved to be the final nail in the coffin for some businesses.

The Paycheck Protection Program (PPP), which closed on Saturday, August 8, provided loans to small businesses, with the specific objective of getting them to maintain employment levels. If certain criteria, such as spending 75 percent of the loan proceeds on payroll, are met and the funds used for other eligible expenses, like paying for utilities, rent, and interest on mortgages, repayment of the loan will be waved, essentially turning the funds dispersed into a grant. The program had a warm reception, with around 70 percent of small businesses applying for loans.

Apart from managing the Paycheck Protection Program (PPP), the SBA has drummed up a couple of other schemes to help small businesses. The agency is providing financial assistance to small businesses “that are currently experiencing a temporary loss of revenue” under its Economic Injury Disaster Loans Program (EIDL). It is also providing a credit of up to $25,000 with an SBA Express Bridge Loan.

The Main Street Lending Program, established on April 9, is meant to provide financial support for businesses that may be too large to qualify for the Paycheck Protection Program (PPP). For example, businesses eligible to borrow under the New Loan Facility can have up to 15,000 employees or annual revenues of $5 billion.

Reopening
Given that for many small proprietors, their enterprises are the sole source of income, many are opening completely or partially, despite persistent coronavirus flare-ups all around the country. At the end of May, around 80 percent of small businesses reported they were “either fully (41%) or partially (38%) open.” 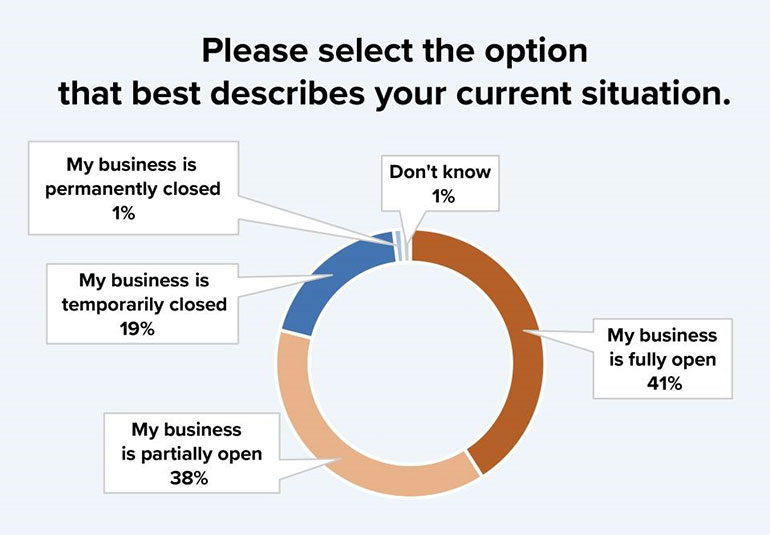 Source: National Academy of the Sciences

Either through necessity or through faith that measures to contain the pandemic will succeed in the end, concern has subsided somewhat. This may be because even though the situation is still worrying, the general feeling is that the worst has passed. As a result, owners are happier with key metrics. Some 56 percent feel reassured by current cash flow, and about half expect next year’s revenues to increase, while just 19 percent think the opposite.

Optimism about the economy is also improving. At the end of May, the proportion of small business owners who rated the U.S. economy as “good’ rose from 21% in April to 24%.  Moreover, during the same period, the proportion of those who gave the economy a rating of “very poor” fell from 29% to 18%. Presently, approximately 70 percent of small businesses report having the same number of employees as before the onset of the pandemic. And of the 30 percent with fewer employees, half expect that they will be able to go back to pre-pandemic levels by the end of the year.

There is no doubt that the coronavirus has had a devastating effect on small businesses. Many small businesses are informally organized enterprises, sole proprietorships, and partnerships, very often more the operation of freelance workers than a business. Nonetheless, aided by support from the federal government, the sector is showing resilience. In the end, its prospects depend on how effectively state, federal and local authorities are able to manage the public health crisis. Economic growth is unlikely when people are still falling ill or dying in record numbers.  For more small business tips and information, contact us at MBA Financial & Accounting Solutions.

It's Free and it's Worth Your Time!

What Are The Benefits Of Outsourcing Bookkeeping?

What is My Tax Return Estimate?